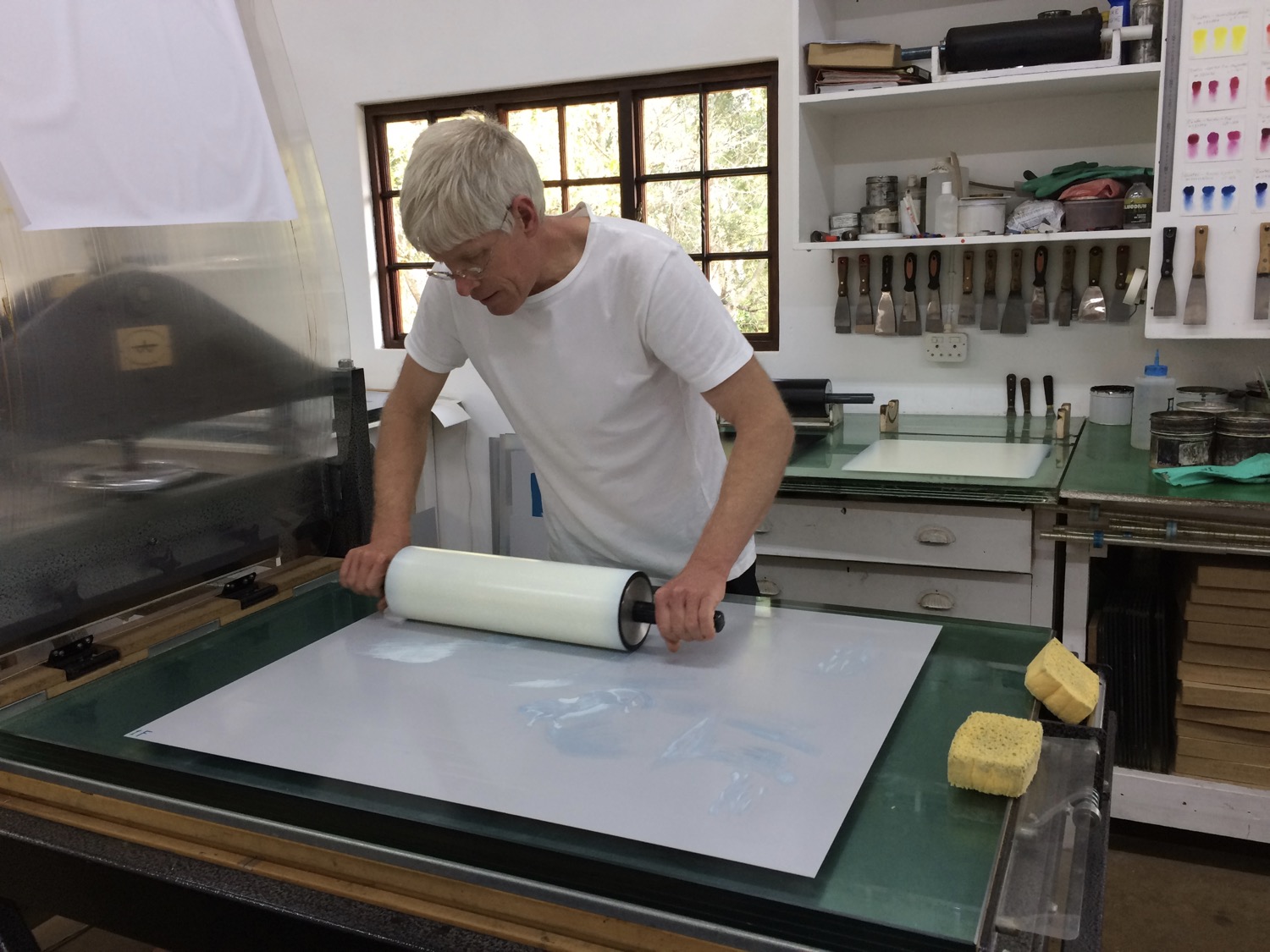 Mark Attwood was born in 1966 and grew up in the Eastern suburbs of Johannesburg. His father, Bruce Attwood was a printer and ran a commercial printing business which gravitated towards the art world and focused on printing books, invitations and offset lithographs for artists. He worked with among others, Walter Battiss, Norman Catherine and Guiseppe Cattaneo.

Mark grew up spending a lot of time in the printshop. By the time he was in his teens he knew that he wanted to work in print and with artists. He left school as soon as he could (end of grade ten in 1981) and did an apprenticeship in commercial printmaking at the Johannesburg Technicon and with his father. This was interrupted by two years of enforced military service where he ended up as a chef in the air force as he deliberately fudged the target shooting skills phase of his training, resulting in the military having no confidence in his weapon skills. He spent his spare time in the camps reading about pacifism and Gandhi.

Bruce gave Mark a copy of The Contemporary Lithographic Workshop around the World which opened a window onto the world of hand printing and he knew he wanted to work more with artists rather than print invoice books and advertising flyers. He had to get the experience of printing by hand, but no opportunities existed in South Africa at the time. Mark saved up money and went to the UK where he managed to find part-time work in studios in London. This was followed by a stint at Lowick House Print Workshop in the Lake District where he was finally able to work in a studio that worked with professional artists doing lithographs. This provided him with sufficient experience to gain admission to Tamarind’s printer training program in the USA.

Attwood returned to southern Africa and got a job at a commercial printing company in Gaborone, Botswana. There he managed to scrape enough money together to pay for his studies at Tamarind and for his airfare to the USA in 1989. At the end of the year, Mark was selected by Tamarind to work in their professional studio. This enabled him to qualify as a Tamarind Master Printer. Mark was the first African to receive this qualification.

In 1991 Mark Attwood returned to South Africa and set his mind to starting his own workshop. He had a forty-year-old flat-bed offset press and a few stones but absolutely no money. He found a job at a commercial printshop on the Western side of Johannesburg and began working morning shifts, which allowed him the afternoons getting the hand-printing side together. He heard from Dumisani Mabaso that an artist's workshop space was being planned in an old building in Fordsburg. Mark approached David Koloane and Robert Loder who were spearheading the project with the proposal that although not an artist, he could offer artists the equipment and expertise to make limited edition prints. They accepted and The Artists’ Press was created, moving into The Bag Factory Artists Studios alongside founding Bag Factory artists Sam Nhlengethwa, Pat Mautloa, David Koloane, Joachim Schonfeldt and Durant Sihlali.

For the first year, Mark worked at his paying “day job” and then would rush over to Fordsburg to get his own space going. The first artist to work with him was Norman Catherine, Mark had to ask him to pay him in advance so that he could buy paper for the edition. Later, in order to make the studio viable, he used his commercial printing skills to prepare and broker the printing of invitations and postcards for artists and galleries. The profits from this commercial work were ploughed back into publishing prints by local artists. Through John Clarke, at Unisa, a locally built litho press made by Roelof Vorster was acquired. As the card business expanded Mark employed people to assist him, one of these was Leshoka Legate who was employed as a driver and general assistant around the studio.

The early and mid-nineties were an exciting time to be in South Africa. With freedom and the first democratic elections in 1994, Johannesburg was the place to be in the arts. A flood of opportunities for artists came in with international links opening up for the first time. The stagnant closed world of Apartheid South Africa gave way to blossoming in the art world. In 2000 Mark was able to order a Takach litho press from Albuquerque and the studio expanded to the point of being able to offer artists all that they needed in terms of lithography. By the end of the millennium, he was able to work more on limited edition prints and less on the commercial work. This was enabled by the fantastic artists that he was able to work with.

In 1997, Mark Attwood’s partner, Tamar Mason gave birth to their first child, Simon. As Simon grew and started toddling about Mark and Tamar grew increasingly worried about the prospect of him growing up in the malls of Johannesburg. When their daughter, Maru arrived in 2000 it was time to move out of Johannesburg. In 2002 The Artists’ Press was able to move to a beautiful purpose built studio in a rural area of Mpumalanga, where Mark could pursue a greener lifestyle and offer artists an even better space to work in. Each year the studio grows stronger as does Attwood’s commitment to living sustainably.

Who are we? Tamar Mason

Who are we? Jacky Tsila