Between 1977 and 1979 Nhlanhla Xaba worked as a labourer at Jabula Milling Company in Springs and after raising enough money he went back to school to pursue his high school studies, which he completed in 1981. As early as the 1970s Xaba was aware of his artistic potential but opportunities to study art at that time were limited. He was fortunate to have met Madi Phala, an artist and designer, who lived in Springs and who became his first mentor in art. For a period of three and half years, Nhlanhla Xaba and Madi Phala lived and worked together informally as practising artists.

During this time Xaba began to produce and exhibit work and in 1981 he decided to go to Rorke's Drift, a missionary arts and craft centre in KwaZulu Natal. Rorke's Drift was the main centre at which many black artists were granted an opportunity to study art, but unfortunately, this was the year during which the centre closed down. On returning to Gauteng, disillusioned, he decided to go back to industry and subsequently joined an egg container manufacturing company, where he again worked as a labourer.

At the beginning of 1985, Xaba went back to KwaZulu Natal, to the Mangosuthu Technikon where he enrolled for Architectural Drafting studies. At this institution, Nhlanhla Xaba spent one year but could not proceed with his studies due to a lack of funds.

The desire to further his artistic endeavours led Xaba to leave his hometown to join the African Institute of Art at the Funda Centre in Diepkloof, Soweto in 1986. From here onwards, although the struggle continued, a new chapter in his life had begun. Together with other aspiring young artists, Nhlanhla Xaba found a home where, for the first time, he was introduced to a consistent and structured arts education programme which was initially linked to the Fine Arts Department of the University of South Africa and later to the Wits Fine Art and History of Art Departments for accreditation purposes.

Since then, opportunities opened up and Xaba participated in numerous local and international exhibitions. Together with Kim Berman, he founded Artist Proof Studio where he worked as a teacher, mentor and inspiration to many young artists. At the time of his death, Xaba was in the process of completing his BA (FA) degree at the University of South Africa.

"In my art, I attempt to convey a painters struggle. I am concerned with shifting boundaries mental and physical. On the canvas and in life, these boundaries are continuously shifting and are complex, centred on the economics and politics of place and time, also geography and physical space. These boundaries are also the urban and the rural, the contemporary and traditional.

I attempt to convey - not the simplicity of representation - but a more complex and layered process. Neither the painting nor the approach is an attempt to surprise the viewer - instead, it recreates what everyone knows. It reflects the process of life and living." Nhlanhla Xaba

In November 2002, on completing the plates for the last lithographs he was to make, Nhlanhla Xaba wrote some notes about the images:

"I worked and taught children's art with thirteen other artists at different orphanages and schools. At the end of the course, we compiled the Khula Udweba handbook for teaching children. Ten years later after the country’s second term of democratic government, the numbers of orphans and street children have tripled.

In 1980 Zimbabwe was freed but twenty years later there is economic instability. Namibia followed in 1990 and South Africa in 1994. Young people of my generation had been scattered all over central Africa, Europe and as far east as Russia for military training to combat the colonisers. But today in our "respectful" countries - there is famine, starvation, the promise of education unfulfilled, promised land and work unfulfilled and so forth.

This is extended to a new generation where we have a constant increase in the number of children in the streets. How they survive, God knows and them.

It is in this context of social instability that these prints are made. The top part of this image depicts children playing and dancing, the middle section shows objects we use in our daily lives; and the bottom has an empty chair, a stooge figure and an empty table. The yellow stooge figure with a star reflects the elderly "disciplinarians" (The different communities’ policy-making structure's societies, and the government). The empty chair has no clear sincere person to occupy it. The empty table symbolises no caretaker for scattered lives. The White horn is a vague empty dream of Africa.

The Dusk and Dawn of Humanity (II) - The Kigali Genocide's (4 plate lithograph)
Every war we wage on our enemies destroys lives and economic livelihoods. There is another life waiting for us to cleanse and take care of ourselves, even those who were our "enemies". Thus as a response, we have "World Summits"; "United Nations" and so forth. What a waste." Nhlanhla Xaba,
November 2002

These two lithographs by Nhlanhla Xaba were drawn and proofed at The Artists’ Press, in November 2002. Xaba worked in collaboration with Mark Attwood for two weeks, after which Xaba approved the prints to print. On 9 March 2003, before the prints were editioned, Xaba died tragically in the fire which burned down Artist Proof Studio. In honour of his memory, we have decided to publish the lithographs as unsigned editions. The artist’s proofs were given to his three children, and profits from the sale of the prints have gone to the Nhlanhla Xaba Family Trust.

"I am pretty much done with this consultation for now," says Nhlanhla Xaba as he steps back appraising a lithographic printing plate he has been working on for the past few days. Nhlanhla's way of working was as unusual as his creative use of language. He worked slowly and considered very carefully every mark he made. A fellow artist in the studio jokingly remarked that watching him work is like watching a chess game, so careful was his concentration as he decided his next move.

The content of the work is what mattered to him, the layers of meaning and significance that are embedded in a work. Making art is not something that came spontaneously or easily to him. He literally had to build a work, one brick at a time. Perhaps this is something he got from his background, as his grandfather was a builder.

Artists at The Artists' Press A to L (listed by surname)

Artists at The Artists' Press M to X (listed by surname) 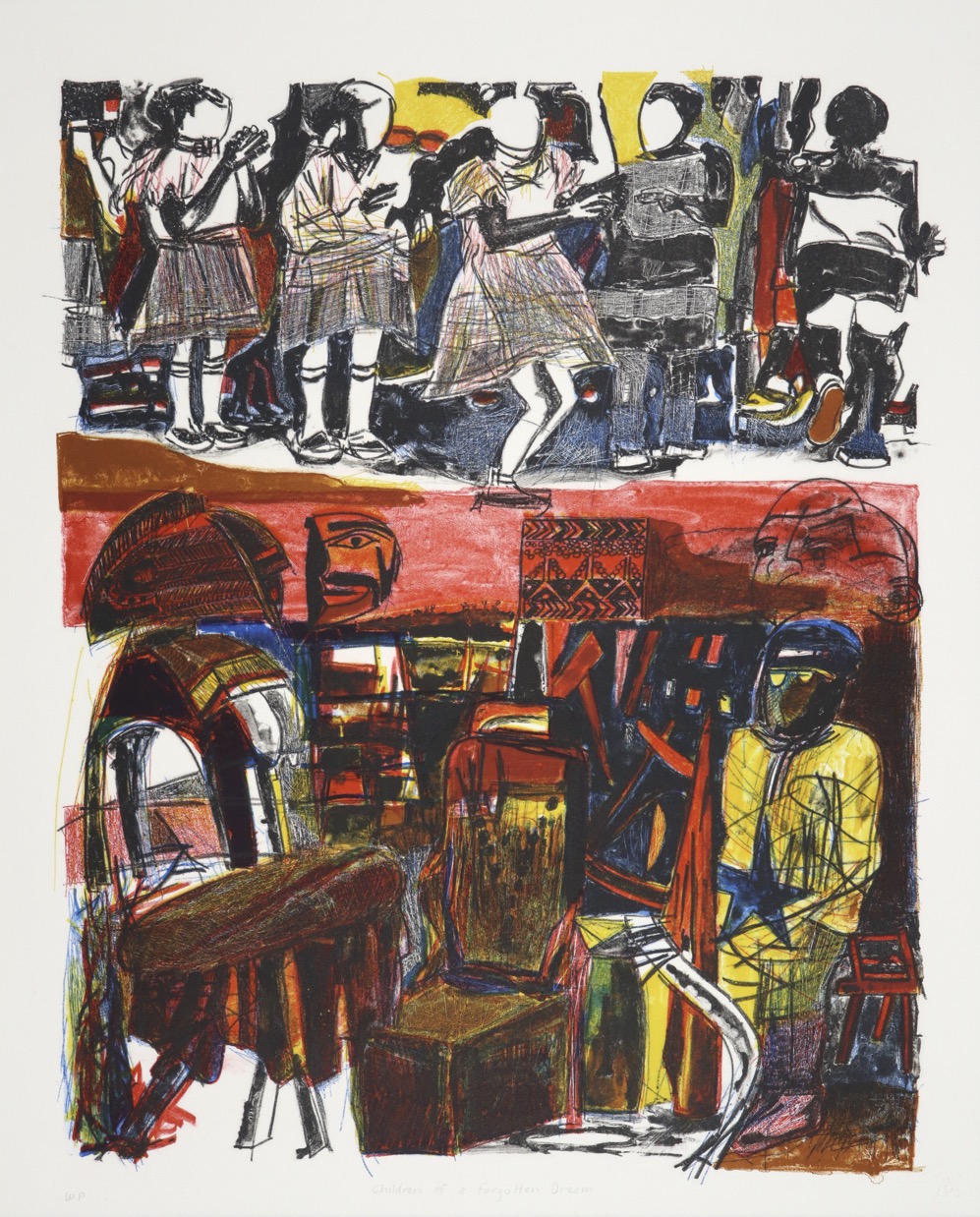 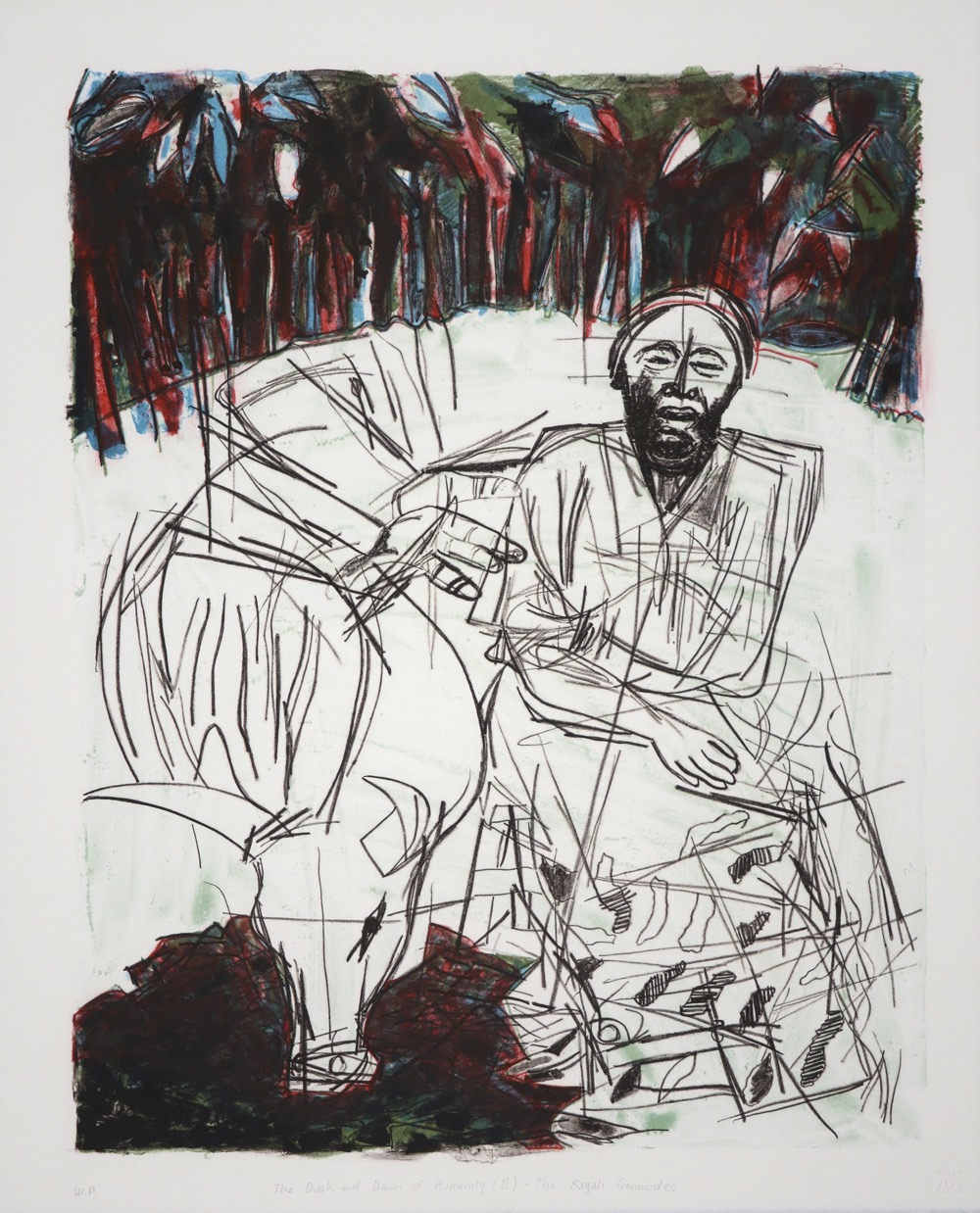 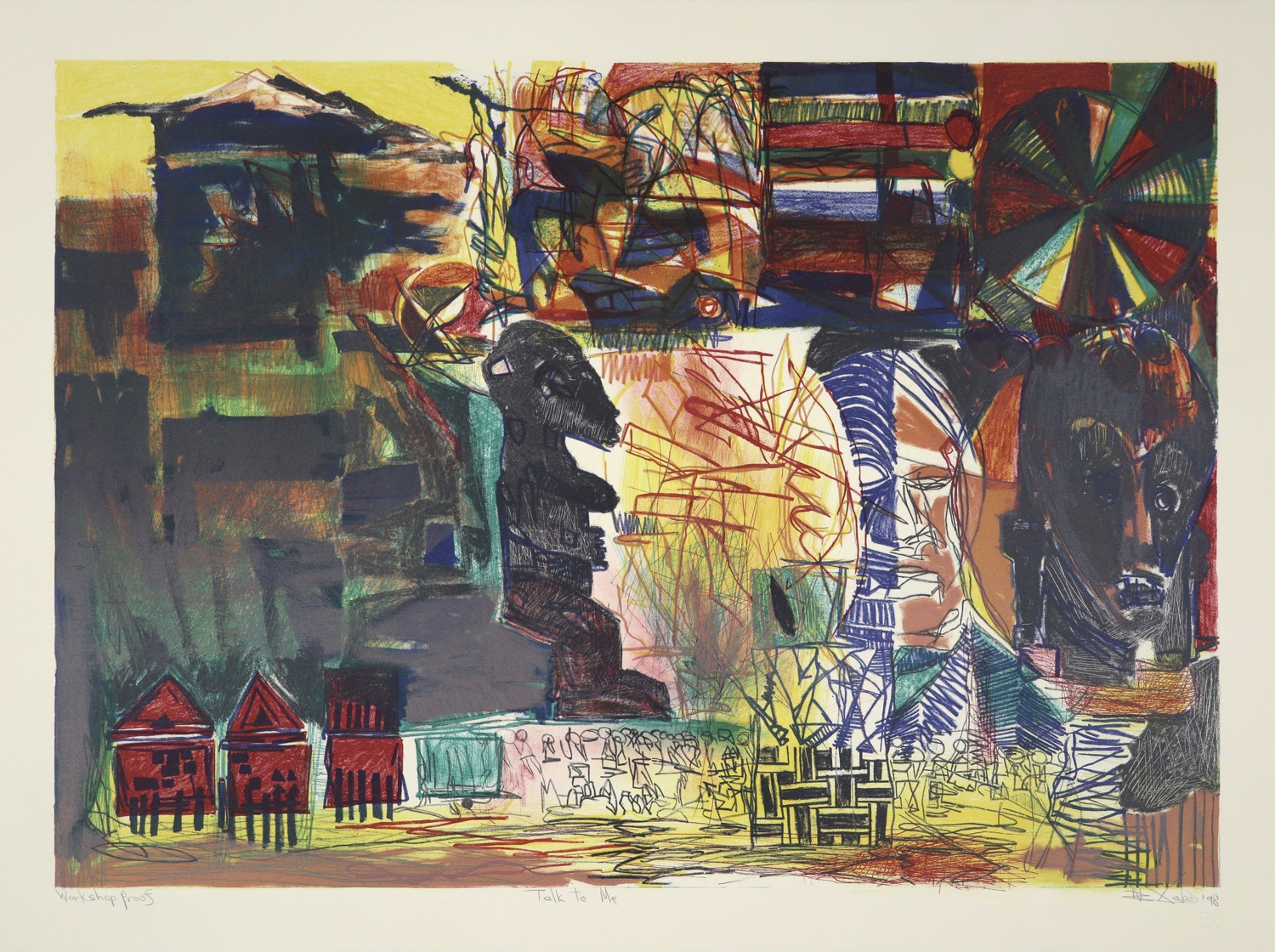