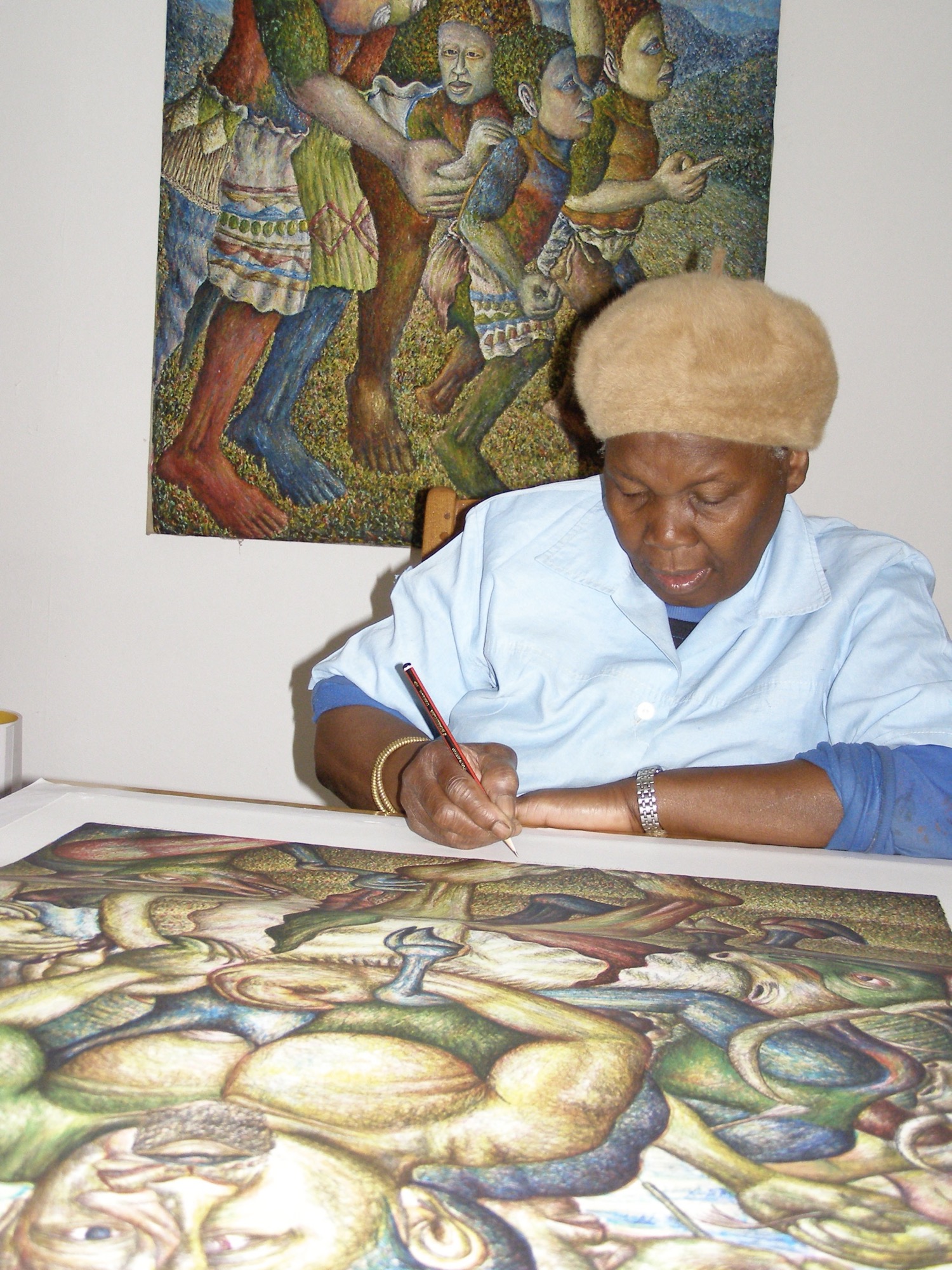 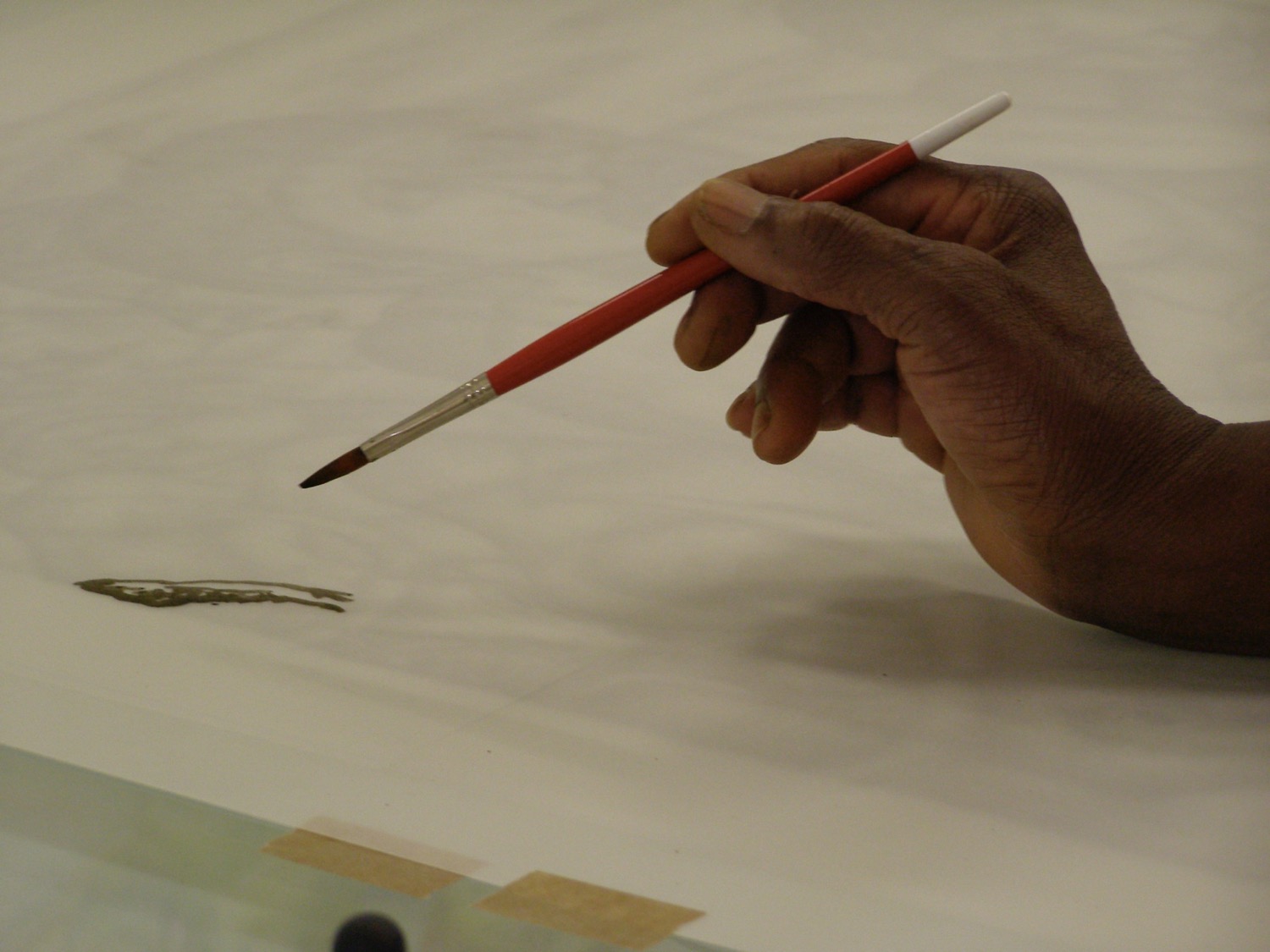 Mmakgabo Helen Sebidi is the first artist that we work with to have received the Award of the Order of Ikhamanga (Silver) from the Office of The Presidency. She is also the first artist that we have worked with who took three weeks to draw one print. But this is not all that makes her unique. In the Taxi book on her published by David Krut in 2009, she says of her grandmother “I remember lying down next to my grandmother while she was making the floor out of cow dung. I wanted to see why her floors were different to everybody else's, so I lay down to watch her and I saw her fingers." Mmakgabo Helen Sebidi has the most beautiful hands; her long delicate fingers taper and seem to capture the spirit of her grandmother.

When Sebidi talks it is not light chitchat but reflections on issues that inform and have created her. It is as if she has become the archetypal crone, further weaving the connection between herself, the land and her grandmother. Her conversation has a way of returning to "the rural” and her grandmother, a return to the land and the female.

Mmakgabo Helen Sebidi first worked at The Artists’ Press in Newtown in 1992 and completed a lithograph on stone. Another print was started and some of the plates were drawn but somehow in the rush of urban confusion, both artist and studio did not find time to complete the project. Having moved to a rural area and being surrounded by a more intact environment, it was time to invite Sebidi back in 2008. She decided to work on the largest size that we can handle. Masterfully drawing her images in eight colours she worked on ball grained films building the image up using litho crayons, watercolour pencils and India ink. The print is done in the unique style that she has built up over the span of her career.

The title After Lobola (Married) suggests something of a struggle, where the woman is the deceiver. Lobola (sometimes translated as bride price) is a traditional southern African custom whereby the man pays the family of his fiancé for her hand in marriage (compare with the European dowry custom where the woman brings assets). The custom is aimed at bringing the two families together, fostering mutual respect, and indicating that the man is capable of supporting his wife financially and emotionally.

Sebidi returned to the studio ten years later and chose to work on two smaller prints, which reflect on her family spirit animal which is the fish, titled Talking to the past and Hoping for the future.

Portia Malatjie's comment in her essay which accompanies the Norval Foundation's (2018) publication on Sebidi's work, is relevant to these prints; "Deeply concerned with the effects of the removal of spiritual considerations in modern day life, Sebidi at once advocates for continuous spiritual immersiveness, as well as warning of the dangers of a loss of tradition."

In the two prints, the human figures interact with the fish in a way that merges the physical and spiritual worlds and realities. A combination of reality and myth, male and female. Looking at the past as a means of hoping for a better future.

Artists at The Artists' Press  A to L (listed by surname)

Artists at The Artists Press  M to X  (listed by surname) 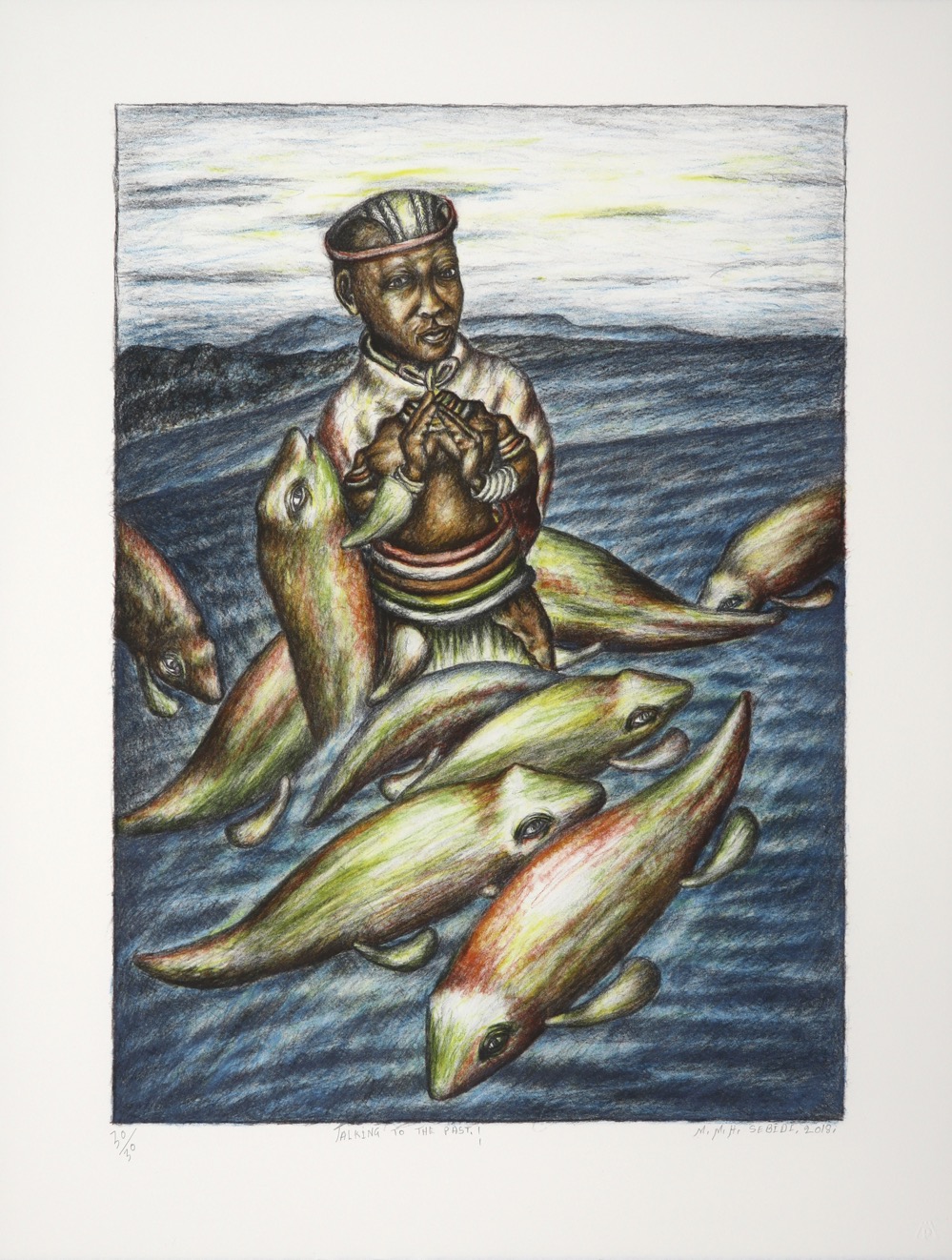 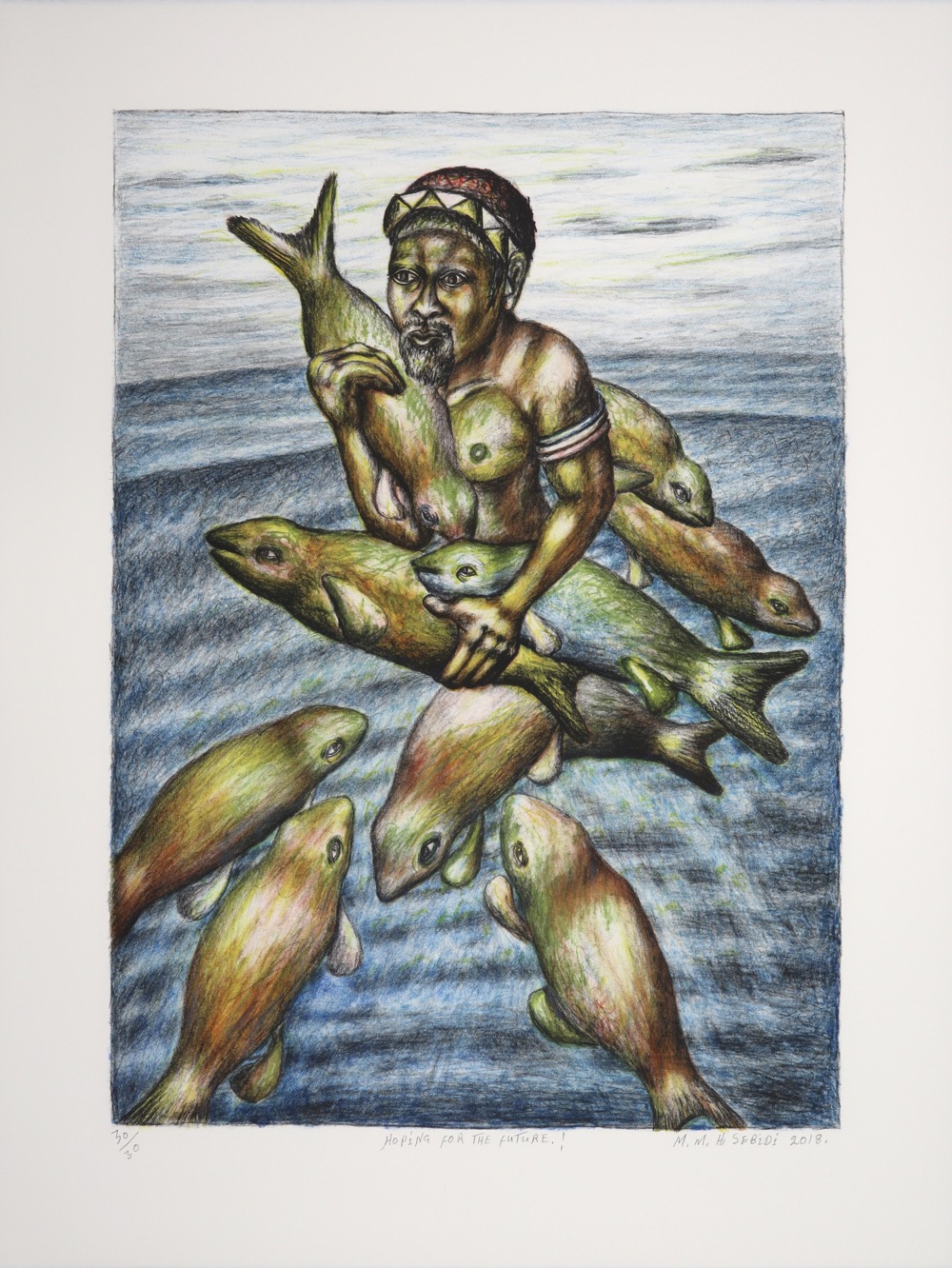 "The cattle are a way of saying thanks to the ancestors for growing her." In this print the woman’s true nature is only revealed once the couple have married and the lobola has been paid. The snake in her hand (lower right hand side of print) is the woman’s true nature. "The snake is a symbol of danger resulting from her decisions and she has become a dangerous woman. The snake shows the effects of city life. After money and education the woman is earning more than the husband and this creates problems. She is a person who polishes, she is very good at pretending and the snake is her true nature. The woman says I am not going to change. I am who I am." Sebidi continues, "Men also suffer from this loss of respect. Respect has been thrown out of marriage. It is an effect of the city."

In the bottom right hand corner of the print is an animal. "It is an animal holding her dress, trying to prevent her from doing bad stuff. It is a helping animal."  Mmakgabo Helen Sebidi, 2009 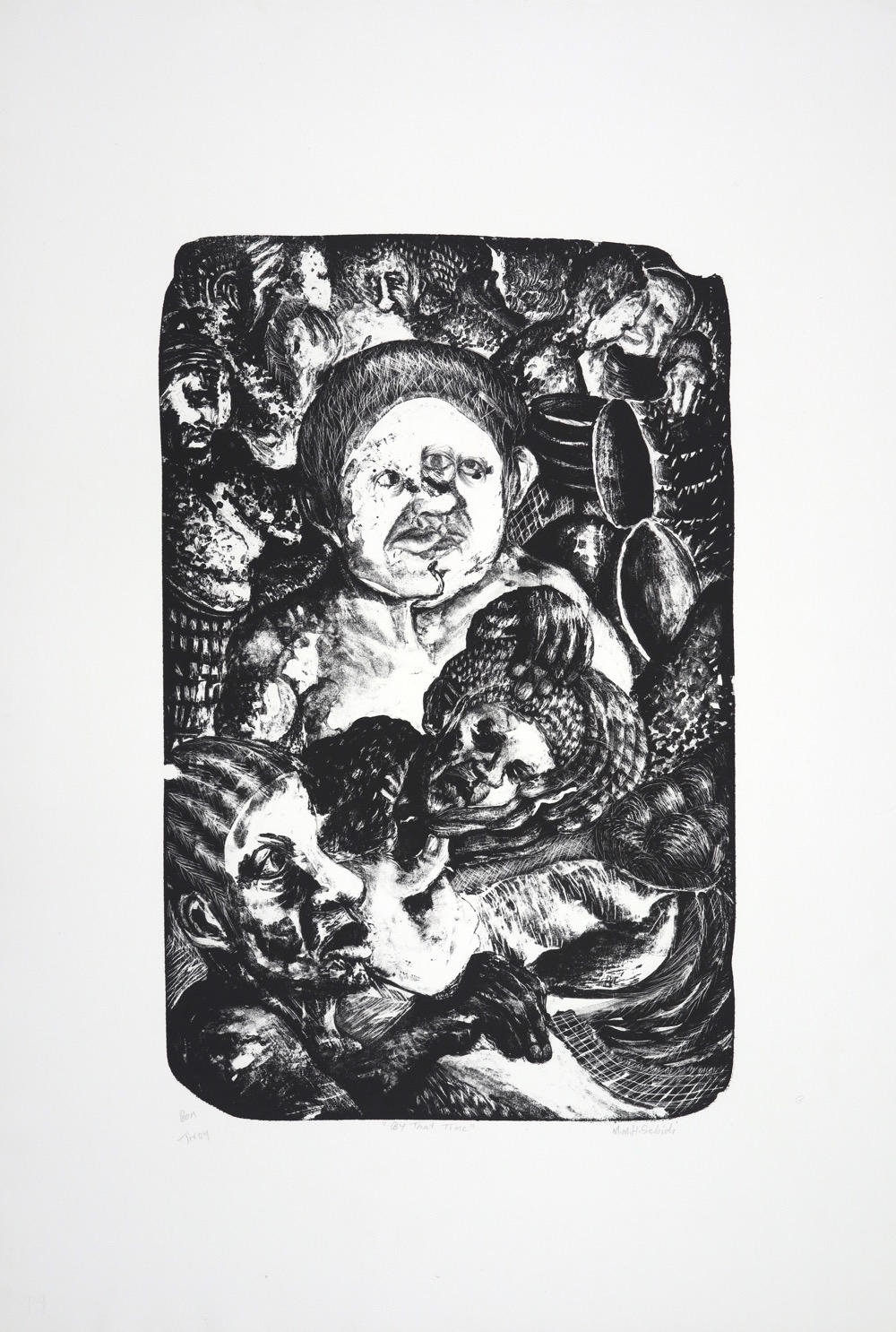