On this page, you will find a archive of prints that Anton Kannmeyer has made at The Artists' Press. The prints on this page are no longer available from us. 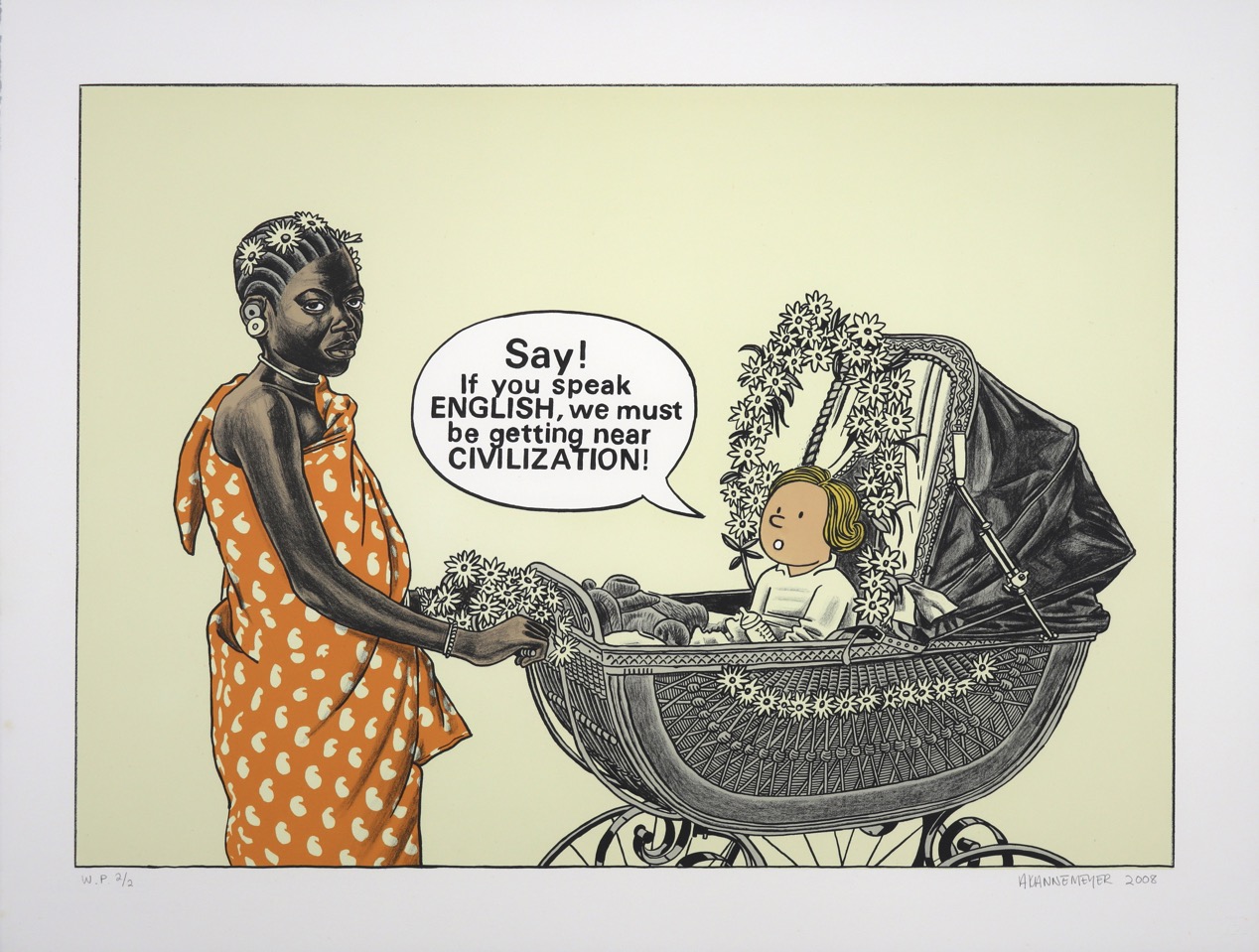 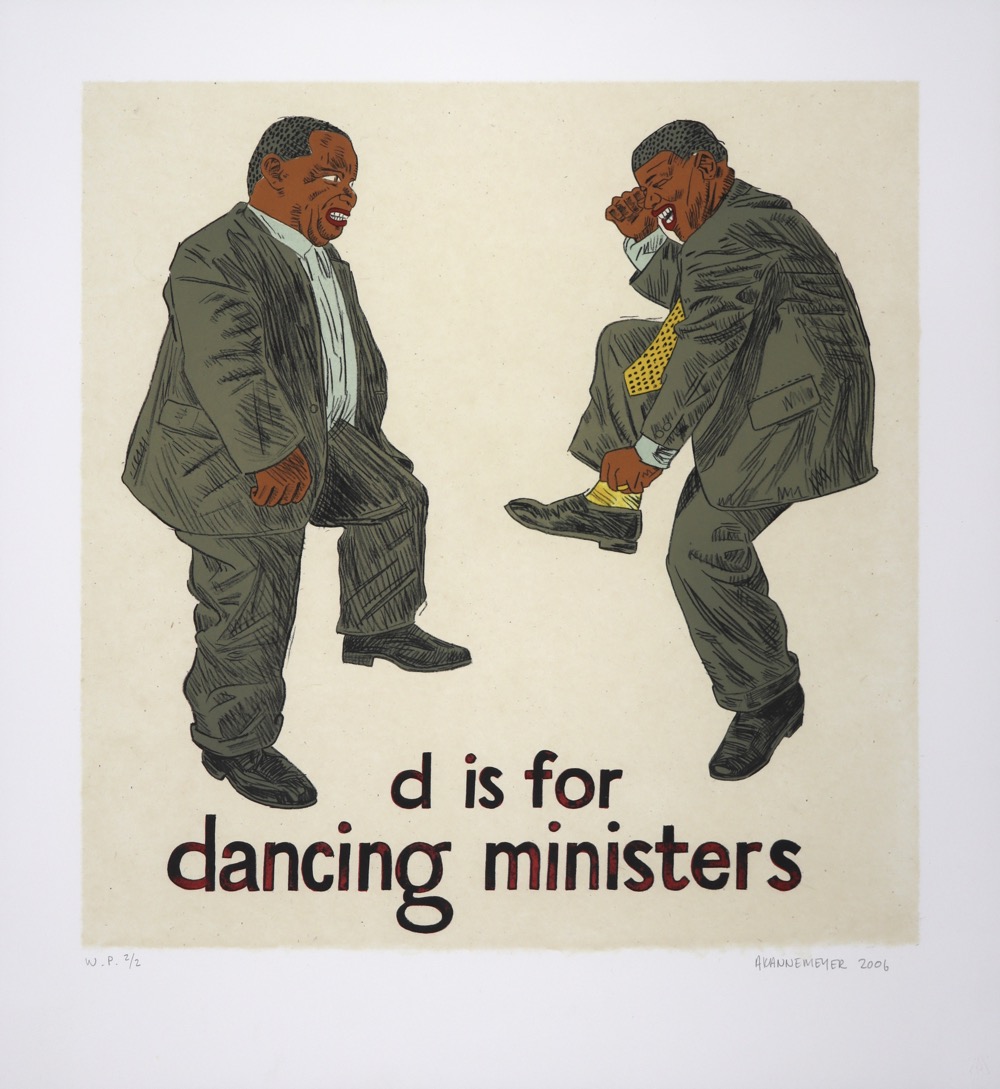 Anton Kannemeyer is perhaps the South African artist most adept at picturing the fantasmatic preoccupations and anxieties of the nation. His work often entails the dimension of political satire, as is clearly apparent in the various caricatured portraits and recontextualised newspaper cut-outs included in Alphabet of Democracy. In this respect one might liken his work to other South African satirists - Zapiro’s political cartoons immediately spring to mind, as do the antics of Loyiso Gola’s Late Nite News, and – speaking historically - the impersonations of Pieter Dirk Uys. More controversially, one might include Brett Murray’s work in this category also, although works like ‘Killed Twice’ (comprised of the bold inscription: ‘Biko is dead’) and the notorious ‘The Spear’, seem ultimately to succeed more in intensifying racial animosities than in highlighting social contradictions in the way in the way in which Kannemeyer proves so adept.

In many respects Kannemeyer’s work both goes further than that of many of the above satirists and yet proves also more refined in its critical sensibilities. That is to say, Alphabet of Democracy affords more by way of nuance than does blunt political satire, certainly so when it comes to playing off many of the uncomfortable resonances between South Africa’s past and present. The alphabet theme provides him with ample scope; key signifiers of the post-apartheid state, ‘R is for Rainbow Nation’, ‘X is for Xenophobia’, ‘L is for lame duck president’, ‘F is for foot-washing’, etc., enable him to arrange a series of recent works in different media, all of which comment on the current post-apartheid condition.

The ‘return of repressed’ could be Kannemeyer’s byline; he has a keen eye for resonances between apartheid and post-apartheid culture. Juxtaposing P.W. Botha’s 1979 proclamation “An irresponsible press is the greatest enemy of democracy” with Blade Nzimande’s 2010 comment “South African media is a serious threat to our democracy” makes for a wonderful case in point. The same is true of the book’s cover.  The front-piece, a well-chosen image for the collection as a whole, speaks of the (post)apartheid era as simultaneously a progression from and yet also a recapitulation of history. It features head-shot portraits of Eugene Terre’ Blanche and Julius Malema in close proximity, and thus poses the question: despite the obvious gulf separating their declared political allegiances, mightn’t these two populist firebrands play a curiously similar role in the psyche of the nation?

Kannemeyer’s pictures call for the participation of an audience, and it works well in this respect that Alphabet of Democracy includes purely text-based images – pencil on paper transcriptions of newspaper articles. What the use of duplicated newspaper texts makes clear is that what is being depicted is not necessarily the artist’s own point of view – a point tellingly neglected in predictable critiques concerning the racist quality of the images that Kannemeyer re-cycles. Such images are themselves (re)transcriptions, and in a far more significant sense than stylistic pastiche. Let us take the golliwog-like portrayals of spear-wielding Africans and colonial servants that float across the depopulated suburban dreamscapes of Kannemeyer’s ‘N is for nightmare’ series. Here, as elsewhere, the offensive imagery Kannemeyer presents us with must be read as what it is: a conduit of fantasy. The (racist) fantasy in question is no doubt unpalatable, derogatory in nature. Nonetheless, it is a fantasy which continues to exert a powerful psychical and societal existence, an existence which should, as such, be made explicit rather than evaded.

Kannemeyer’s chosen form, i.e. the comic-book conventions of depiction so brilliantly exploited in his Bittercomix collaborations, has frequently been commented upon (Barnard, 2004; Tyson, 2012). He uses this visual idiom to great effect, setting up a type of internal dissonance between form and content, as in panels in which Tintin-esque characters play out scenes of colonial slaughter and brutality (see particularly his Pappa in Afrika, 2010). Such borrowings from earlier visual styles turn past historical forms jarringly against their former horizons of meaning. What is in question here is not only the contrast between form and content, but the lingering presence of apartheid sensibilities which cannot – or should not – be spoken (even thought) in the post-apartheid present. Take ‘A black woman’ a depiction of a job interview in which a white employer asks of his prospective employee, depicted in a typically over-the-top caricature of blackness, “I see from your résumé that you are a black woman."

While Alphabet of Democracy dispenses in large part with the compositional conventions of comic-book illustration, the effectiveness of many of the images still pivots of Kannemeyer’s manipulation of form. Take for example his compositional choices in the ‘N is for nightmare’ series, perhaps the most arresting sequence of images in the book. The pallid colouring with which the safe environs of white suburbia are depicted – subdued tones of grey and brown - contrasts sharply with the saturated bright colours of a series of circular inlays. These circles, somewhat like the thought bubbles which hang over the heads of characters in comics informing us what they really think, include white South Africa’s proverbial ‘worst nightmare’: violent blacks on the rampage with knobkerries and pangas; a domestic worker serving up a white man’s head on a platter; AK47-carrying African militia; a ‘native’ boy in colonial garb issuing instructions to a prostrate white subordinate. These images float above the anxious white environs, existing at a level that cannot be adequately integrated into the fabric of the apparent (repressed) everyday reality of the situation. Nonetheless, they are the ‘most real’ elements within the scene as a whole.

If we take seriously the thesis I am advancing in reference to Kannemeyer’s work, namely the idea that he effectively gives form to, pictures fantasy, then we might reverse the politically-correct impetus to censor.  If racist fantasy is sustained by existing precisely at a subliminal and/or disavowed level, then the attempt to condemn such images might be said to be suspect, for the simple reason that it allows them to persist unseen and unconfronted. It is when fantasy remains concealed that it is at its most virulent.

Archives of other artists' prints